From 1 February 2013 to 31 October 2014, Dorte Kook Lyngholm, MA (History and Philosophy), PhD (History) worked on the research project, ‘Inequality Before the Court’ at the Danish Research Centre for Manorial Studies. The project was funded by the Ministry of Culture Denmark. 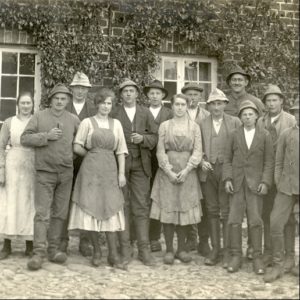 On early 19th-century estates, residents were traditionally subjected to the legal authority of the estate owner. Thus, legal ties to the estate owner remained a living reality for the large group of people who supplied labour for estates and manor houses throughout the century,

However, as the 19th century progressed, the independent legal latitude of the estate owners (for example, as regarded the right to administer punishment) was gradually limited.

The project examined legal practice in the context of conflicts with servants on estates and the development that the courts’ administration of legal disputes involving servants’ conditions underwent in the 19th century. Using archive material from settlement commissions and police courts, the project illustrated how the courts tackled the fundamental ‘inequality’ that existed between estate owners and their servants. The project examined the rule of law in a historic context, contributing new information about key aspects as the country headed towards today’s constitutional state.

Dorte Kook Lyngholm’s publications include her PhD thesis, ‘The patrimonial right. The estate owner as legal authority and private operator in the Danish legal system of the 18th century’ (Aarhus University 2012), published in 2013 under the title, The Right of the Estate Owner. Law Enforcement by the Nobility in the 18th Century – Law and Practice at Clausholm’s Birkeret and an article on ‘Noble estate owners as prosecutors in the local legal system in the period of absolute monarchy’ (Danish title: “…da bør hans Husbond derpaa at tale. Adelige godsejere som anklagere i enevældens lokale retsvæsen”) ed. Signe Steen Boeskov, Dorte Kook Lyngholm and Mikael Frausing: As Befits a Nobleman. Celebratory piece for Carsten Porskrog Rasmussen on the occasion of his 50-year birthday. (Det pryder vel en Ædelmand.) The Danish Research Centre for Manorial Studies, 2010.