The Manor House – Ideals versus Practice
Gammel Estrup as Home and Status Symbol, 1830-1930

On 1 November 2014 Dorte Kook Lyngholm, MA (History and Philosophy), PhD (History) embarked on the research project, ‘The Manor House – Ideals versus Practice. Gammel Estrup as Home and Status Symbol, 1830-1930.’ at the Danish Research Centre for Manorial Studies. The project was funded by the Ministry of Culture Denmark.

The project investigated the particular, contrasting roles of the gentry at the time, as reflected in ideals of domestic culture and interior decoration, focusing on Gammel Estrup as an example. The project shed light on the cultural distinctions, which were expressed in the material settings that the genteel families created for themselves. Based on reconstructions of interiors and atmosphere, the project aimed at identifying the cultural values of the gentry, examining their self-image in both a modern and a traditional perspective. 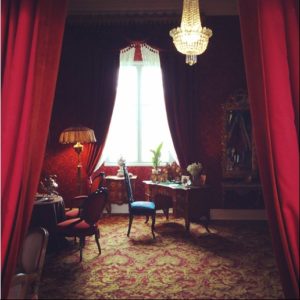 In the early 19th century, after centuries of greatness, bankruptcy reduced Gammel Estrup to one of many small manor houses, in which the ambition of living out a genteel ideal of magnificence had to be carefully balanced against economic realities. Hence, using Gammel Estrup as a case study could contribute to a greater understanding of the ‘ordinary’ manor house’s efforts at retaining its status, illustrating a type of gentry, which previous research had barely touched on.

The project was conducted on the basis of in-depth archive surveys of source material, which until that point had gone unnoticed in this context. The results of the project will be applied directly in the on-going work on the restoration and refurbishment of interiors dating from 1840 to 1920 in the permanent exhibition at the Gammel Estrup The Danish Manor Museum.

Dorte Kook Lyngholm’s publications include her PhD thesis, ‘The patrimonial right. The estate owner as legal authority and private operator in the Danish legal system of the 18th century’ (Aarhus University 2012), published in 2013 under the title, The Right of the Estate Owner. Law Enforcement by the Nobility in the 18th Century – Law and Practice at Clausholm’s Birkeret and an  article on  ‘Noble estate owners as prosecutors in the local legal system under absolute monarchy’ (ed. Signe Steen Boeskov, Dorte Kook Lyngholm and Mikael Frausing (ed.): As Befits a Nobleman. Celebratory piece for Carsten Porskrog Rasmussen on the occasion of his 50-year birthday. (Det pryder vel en Ædelmand.) The Danish Centre for Manor House Research, 2010.