Kasper Steenfeldt Tipsmark, who is a PhD student at Aarhus University, commenced his PhD project on the equine culture and the role of the horse at the court of Christian IV in February 2018. For two consequtive years prior to the project, Kasper was a student assistant at the Danish Research Center for Manorial Studies, which has effected Kasper’s project and publications to also incorporate horses and country houses besides the dominat focus on court studies.

The thesis of Kasper’s project, which has the current title “Early Modern Tournaments: Equine culture and the role of the horse at the court of Christian IV 1588-1648”, is that the connection between human and horse at the early modern court represents a key to understanding the transformation of the European nobility, courtly interactions and early modern civilizing processes in general.

More specifically the project will examine the equine culture at the court of Christian IV in a time where the horse, despite of military developments, was and continued to be a core symbol for the king as well as the nobility. A special focus will be placed on the multifunctional role of the horse as a practical and socializing tool, as symbol of identity and status, and as social psychological mirror to the societal elite in a period where increasing demands on courteous behavior set in at the royal court. 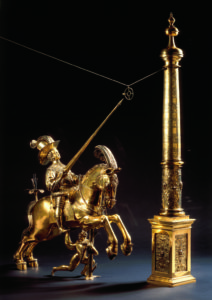 With a height of 51.2 inches, Christian IV’s gold-plated ringdreper troupe tells the story of the king’s coronation in 1596. Heinrich Beust, Braunschweig, 1598. Photo: The King’s Collection – Rosenborg.