As part of the establishment of a research group, which concentrated on the final heyday of the Danish manor houses, the historian Adam Schacke worked on a two-year postdoctoral project entitled ‘The Structure, Finances and Running of Estates, 1849-1919.’

In September 2005, Adam Schacke was awarded his PhD by the Faculty of Humanities at the University of Southern Denmark for his thesis, ‘Estate, Farms and Cultural Landscape. Terms of Possession and Estate Structures in the Southern Area of Northern Jutland from c. 1570 to 1790’. 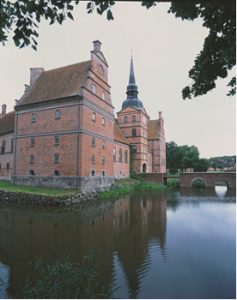 In his postdoctoral project, Adam Schacke examined the structure and economy of country estates in the period following the abolition of absolute monarchy in Denmark in 1849 and up to the abolition of entailed estates in 1919. In 1849 much of the old Danish estate system was still in place. The system consisted of two parts: firstly, the estate owner’s own manor or manors, which he either ran at his own expense, or leased for a number of years. Secondly, it included the copyhold estate, which paid taxes to the estate owner, and which was subject to a large number of legal regulations.

The fundamental distinction between the two was clear-cut, and the estate owner could not convert copyhold land into manor land. During the period of the study, the traditional copyhold estate disappeared, but larger estates had at their disposal an increasing number of farms of various sizes, which they could lease out for a number of years at a time. The estates also devoted greater effort to forestry and light industry.