Jesper Laursen, DPhil, Editor at Moesgaard Museum. The biography has been co-written with Niels Clemmensen, DPhil, external lecturer at Copenhagen University. The project was under the aegis of Moesgaard Museum in cooperation with the Danish Research Centre for Manorial Studies, and was supported by the Augustinus Foundation and the Aage and Johanne Louis-Hansen Foundation.

Mogens Frijs’s roles as a nobleman, a landowner and a politician are closely connected, but nobility is the common thread. First and foremost, he was an aristocrat with the traditional attributes and lifestyle attached to that status. But he was also a forward-looking politician, who realised that the landed nobility had to come up with new approaches if they wished to retain their political influence. 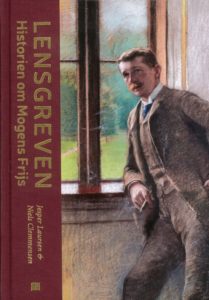 During the so-called ‘Indian Summer’ of the manor houses, Mogens Frijs, with his almost princely lifestyle, was the frontrunner among his aristocratic peers, when it came to glaring manifestations of noble sovereignty and exclusivity. The writers will examine what made him tick, and how his efforts could be so successful at Frijsenborg in Jutland: located so far away from the islands’ concentration of estates and their trend-setting manorial culture.

As the owner of the largest estate complex in Denmark, the shire of Frijsenborg, he harboured a desire to perpetuate the line his father had established. With a vast fortune, earned from selling the copyhold estate, his father had made every effort to develop the remaining part of his shire into an exemplary model farm. The writers will investigate whether these efforts were continued in Mogens Frijs’s time as owner, and how the values of the estate were managed.

Mogens Frijs was to play an extremely important role as a Danish politician, without, however, making any sustained effort. Considering his fundamentally conservative views, it may seem paradoxical that, as leader of ‘The Eight’, a new political group formed by members of the Conservative Party, he was partly responsible for the fall of prime minister Estrup in 1894, and for the change of parliamentary system in 1901. Later, he was involved in the genesis of the new democratic Constitution in 1915 and the abolition of entailed estates in 1919. This raises the question of how, given his conservative attitude, he acted in relation to political reality.

The project is based on previously unknown archive material held at Frijsenborg.